Born in Palermo, Sicily in 1929, Jasper Brandisi was a poet, writer and academic.

Raised in London by his mother and stepfather, Jasper attended Eton School from the age of eight, followed by Trinity College, Cambridge, from where he graduated in 1951 with a B.A. in Mathematics. During his time there, he edited and wrote for the influential student magazine, Granta.

His prose was also published in the leading British humour magazine, Punch from 1947. Jasper was to become an assistant editor in 1957 and he contributed to the magazine for the remainder of his life, always adopting pseudonyms. He was a talented cricketer and played for two amateur cricket clubs: the New Allahakbarries and the Authors XI. In 1954, he returned to Cambridge and completed a first-class degree in English Literature.

Jasper had met Formby when the performer starred in Jasper’s play, Travelling Down from Rochdale. 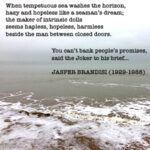 When tempestuous sea washes the horizon,

beside the man between closed doors.

said the Joker to his brief… 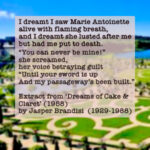 DREAMS OF CAKE AND CLARET (1958) extract

I dreamt I saw Marie Antoinette,

and I dreamt she lusted after me

and had me put to death.

“You can never be mine!”

“Until your sword is up

And my passageway’s been built.” 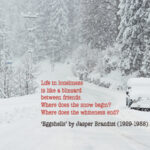 Where does the snow begin?

Where does the whiteness end?